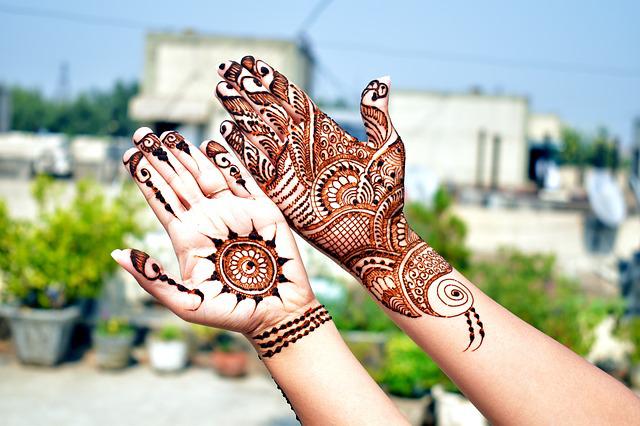 Mehndi holds a lot of cultural significance in different parts of the world. If we talk about Indian culture, mehndi plays an important role in all the ceremonies and festivals like weddings, Karva Chauth, Rakhi, Diwali etc.

But do you also know that Mehndi has now become a part of many other cultures too. In western cultures, henna has been a great trend and most like in the form of henna-tattoos. Every culture has its own patterns and designs. There are some amazing and important types of Mehndi designs that became trendy and always in demand.

So, scroll and go through the 8 different types of Mehndi designs that are extremely popular across the world.

These are 8 important types of Mehndi designs that are preferred by women all around the world.

Arabic Mehndi designs are very popular among the ladies all over the world. This type of mehndi is simple but yet very elegant. Patterns of leaves, vines, birds and flowers make it very unique. It is not applied on the entire hand like Indian Mehndi. Empty space in this style of Mehndi is of utmost significance and gives a royalty and elegant look.

This design is mostly loved by young and unmarried girls who like to go minimalist but really want to get a very feminine and youthful look. If you don’t have much time and don’t want to go with traditional Mehndi designs, try Arabic Mehndi because it is always graceful. Arabic Mehndi is now counted among the topmost popular Mehndi styles all over the world.

Western Mehndi design is the blending of other mehndi designs like Arabic, Pakistani, Indian, and Moroccan mehndi designs.This type of mehndi design are not traditional for the use of Mehendi on their palm but applied just for the ‘temporary-tattoo’ feel.

Unlike heavy coverage of the Indian mehndi these designs are given in such a way that the pattern look likes hand worn ornaments. You can say this is a very unique mehndi design inspired by geometrical figures, quirky frames, twists and modern designs of western society.

Pakistani Mehndi is basically inspired by the Pakistani traditions and values. Like Arabic designs, they are too inspired with flowers, veins and leaves but it has a lot of unique patterns that make it unique to other designes. These designs usually include florals, mosques, leaves, mandala designs, domes and so much more. This style has bolder outlines and mostly comprises of intricate artwork. This is also one of the best mehndi designs in the world.

Indian Mehndi designs are most popular among the Indian ladies who want full coverage of the hands on both sides. Indian mehndi style always has had something unique to offer for every age and every occasion. That’s why Indian mehndi change its styles and patterns according to the festive like Deepawali and Karva Chauth.

Indian Mehndi has a lot of importance in marriage ceremony. Bridal mehndi in Indian mehndi style makes the hands adorned with dholkis, palkis, bride-groom artwork, mandap and kalash. It has a lot of cultural significance associated with it which makes it really amazing to get done.

Moroccan mehndi design is very famous among young mehndi enthusiasts. These mehndi designs are so simplistic that anyone can try these after a bit of training. This sort of mehndi style comprises of geometric shapes and curves, traditional tribal patterns, diamonds shapes and prominent dots. The most popular figure of Moroccan mehndi designs is Diamond shape. These Morocco figures and structure presents them a favored preference amongst the men who are interested in henna-tattoos as well. So, we can say it is unique and different from regular mehndi designs.

Indo-Western mehndi is the design done by combining Indian and Arabic designs. It gives a western touch in Indian style. It has no relations with the traditional mehndi designs. This design is very famous in Indian fashion industry. In Western countries Indo-Western mehndi is more popularly known as “henna tattoos.” This mehndi design has gap between the designs which is the most prominent feature of this style of mehndi art. If you don’t want full coverage on hands but love Indian design, then this is best design for you.

As the name indicates, it is the perfect combination of Indian and Arabic style of mehndi designs. Like Indian mehendi designs, this mehendi design also comprising all the patterns of leaves, florals, paisleys, dots, chequered, etc. but empty spaces and bold lines gives it an Arabic touch. This design gives trendy, stylish and attractive touch to traditional Indian mehandi designs. It’s one of the most beautiful examples of fusion art. On special occasions and festivals it is most popular mehndi design that looks elegant and eye-catching.

Mehndi/Henna has been a part of the West African culture for almost a thousand years. African mehndi designs are also similarity with Arabic mehndi in terms of gaps and bold outlines.

This design consists of tribal patterns which relate to the culture. Its cultural patterns make it different from Arabic mehndi.

Was this article helpful to you?